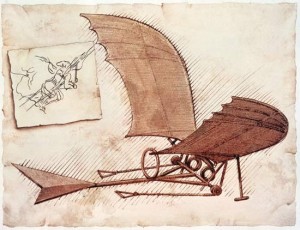 Don’t do watercolours on cheap paper.

Don’t put your brush in your mouth — or smoke.

Don’t lock yourself into anything.

Don’t try to sell your work right away.

Don’t sweat the small stuff; go for the big picture.

Don’t worry when somebody says your work is not so hot.

Don’t worry when somebody says your work is great.

Don’t take yourself too seriously.

Don’t be afraid to do something over and over.

Don’t listen too much to perceived authority.

Don’t be afraid to listen to your own intelligence.

Don’t try to please anybody except yourself.

Don’t be either too vain or too modest.

Don’t talk about what you’re going to do.

Don’t be afraid to look at other people’s stuff.

Study drawing for a helicopter or “Aerial screw” 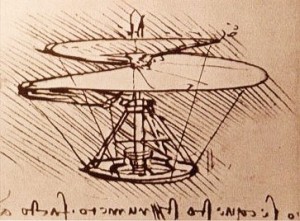 PS: “Anyone who conducts an argument by appealing to authority is not using his intelligence; he is just using his memory.” (Leonardo Da Vinci)

Esoterica: Now that’s done, here’s this: By eliminating the “d” word and its partners from your vocabulary you can put a positive spin on yourself and those around you. Informed optimism is the flood that lifts and carries seemingly impossible projects.